The Buddha's Dreads: Rasta-Buddhists, Japanese Rastafarians and the Ngakpa Tradition (the spirit of locking part 2) 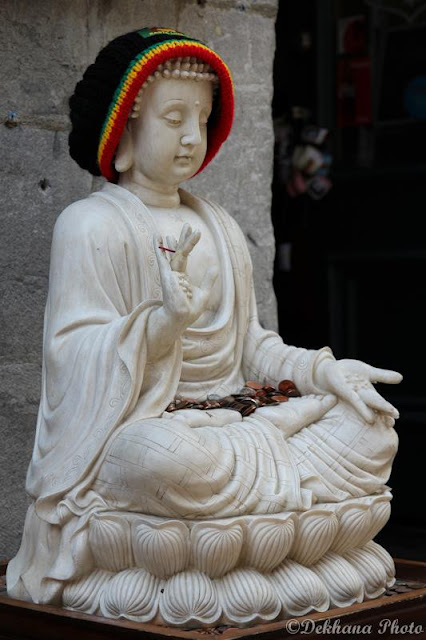 In many parts of the world at various times throughout history, growing the matted and knotted lengths of hair that we most commonly call 'dreadlocks' has a deep relationship with asceticism and intense religious or spiritual practices.

I've touched briefly on the Rastafarian religion earlier in this blog (though much more can and will be covered in a later 'spirit of locking' post) and on the so-called Polish Plait, lengths of matted hair believed to placate supernatural entities that caused disease.

But for today, I'd like to hone in on the varied and various traditions of loc'ing/locking/dreadlocks as they have arisen in Japan, Tibet and Bhutan. 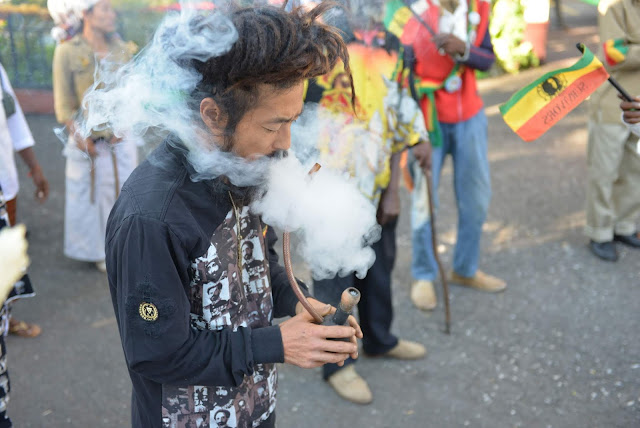 "A small but devoted Rasta community developed in Japan in the late 1970s and early 1980s.

"Rasta shops selling natural foods, Reggae recordings, and other Rasta-related items sprang up in Tokyo, Osaka, and other cities.

"For several years, 'Japan Splashes' or open-air Reggae concerts were held in various locations throughout Japan.

"For a review by two sociologists of how the Japanese Rasta movement can be explained in the context of modern Japanese society, see Dean W. Collinwood and Osamu Kusatsu, “Japanese Rastafarians: Non-Conformity in Modern Japan,” The Study of International Relations, No. 26, Tokyo: Tsuda College, March 2000." 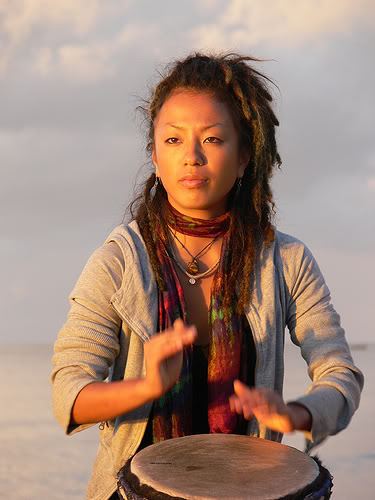 In her introduction to the photobook Dreads by Franesco Mastalia and Alfonse Pagano, Alice Walker writes about Rasta-Buddhists:

"In Japan, Rasta-Buddhists subscribe to the belief systems of both ancient Buddhism and modern Rastafarianism, two philosophies vastly different in origin but strikingly similar in outlook.

"Unlike Zen monks, who shave their heads to indicate purity and simplicity, Rasta-Buddhists let their hair lock as a sign of their acceptance of nature's divine order." 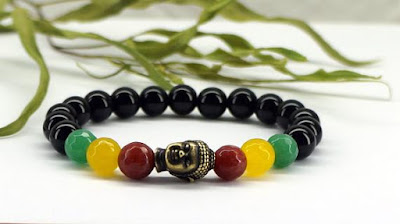 Blake Moore, in his essay "Jammin in Jah Pan" for Tokyo Time Out, writes:

"Most Rastas believe that Japanese are more receptive to Rasta's unadorned belief system and because, historically speaking, Japan itself has never been strictly tied to an ordered religious doctrine.

"Like Zen [Buddhism], Rasta is a way of life rather than a religion, and Japan's new converts are relating to the parallels between the two.

"Looking for a direction, they see the lifestyle of Rasta as both a spiritual injection and a release from the narrow striving of materialism."


Yet even so one encounters all three of these. 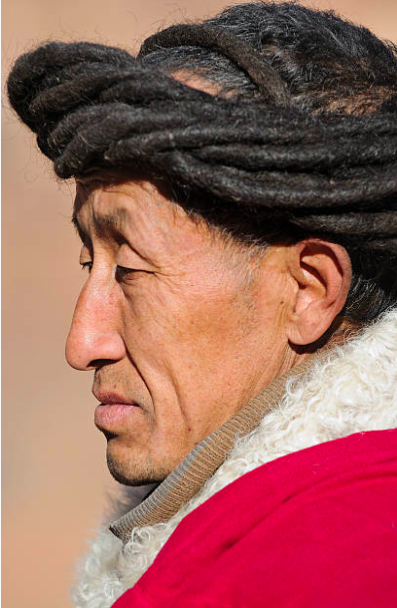 "Within Tibetan Buddhism and other more esoteric forms of Buddhism, dreadlocks have occasionally been substituted for the more traditional shaved head. The most recognisable of these groups are known as the Ngagpas of Tibet.

"For many practicing Buddhists, dreadlocks are a way to let go of material vanity and excessive attachments. Dreadlocks were required for many esoteric Buddhist rituals in medieval South Asia performed by Buddhist yogis (Buddhist counterparts to contemporary Hindu sadhus).

"For instance, the Hevajratantra states that the practitioner 'should arrange his piled up hair'. In contemporary Tibetan practice matted hair is replaced by crowns with matted hair attached to them." 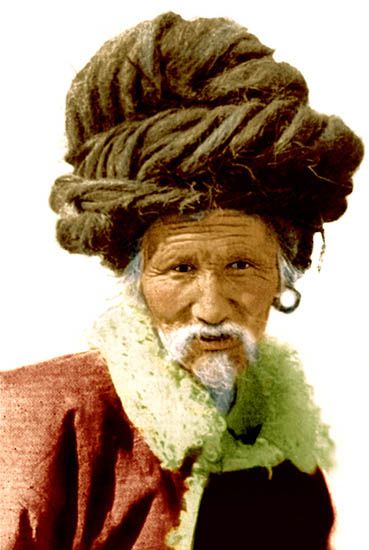 "In Tibetan Buddhism and Bon, a Ngagpa is a non-monastic practitioner of Dzogchen, who has received a skra dbang, a hair empowerment, for example in the Dudjom Tersar lineage.

"This empowers one's hair as the home of the dakinis and therefore can never be cut...

"The term is specifically used to refer to lamas and practitioners (male or female) who are 'tantric specialists' and may technically be applied to both married householder tantric priests (khyim pa sngags pa) and to those ordained monastics whose principal focus and specialisation is Vajrayana practice.

"However, in common parlance (and many western books on Tibetan Buddhism), 'ngakpa' is often used only in reference to non monastic Vajrayana priests, especially those in the Nyingma and Bonpo traditions. 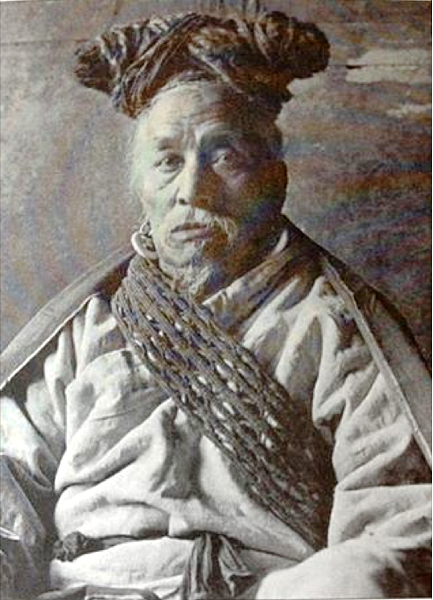 "In Bhutan, and some other parts of the Himalayas, the term gomchen is the term most often used to refer to this type of Vajrayana priest, with ngakpa being reserved only for the most accomplished adepts amongst them who have become renowned for their mantras being particularly efficacious.

"Traditionally, many Nyingma ngakpas wear uncut hair and white robes and these are sometimes called 'the white-robed and uncut-hair group'." 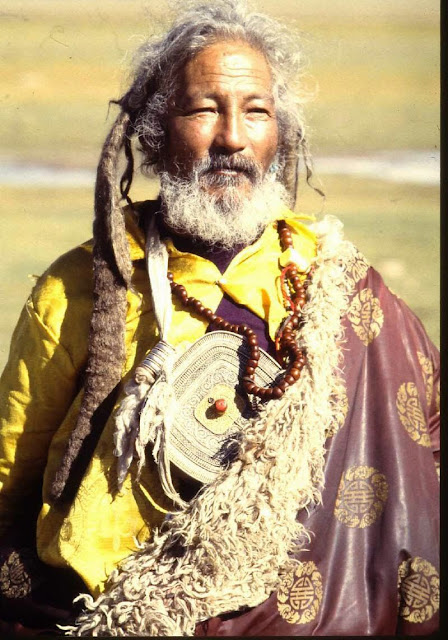 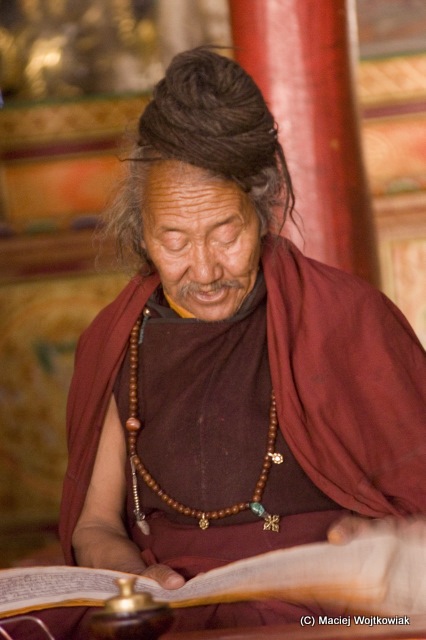